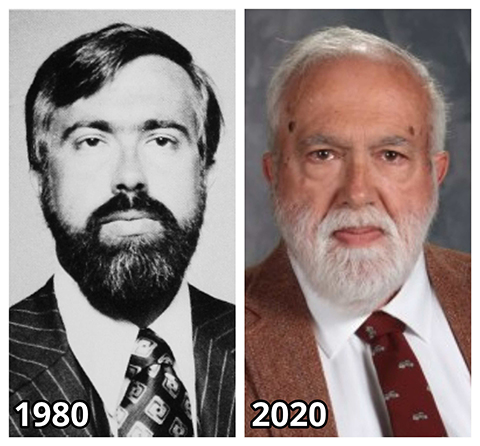 If you would like to make a gift to honor Mr. Z's memory, please use the form below to support the
James M. Zolnowski Memorial Fund.

Mr. Zolnowski, known to the Chaminade Family simply as “Mr. Z,” joined Chaminade's faculty in 1979. Mr. Z held degrees in business, industrial engineering, theology, and philosophy, all from Xavier University. In 1982, he was named director of the residence program, a position he held until 1989. To this day, he remained involved with the resident program in Canning and Frische Halls. In 1996, he became the school librarian and archivist. Mr. Z served as the sacristan for all Chaminade masses; prepared historical displays for class reunions and “Celebrate Chaminade”; and worked with campus ministry to decorate the Immaculate Conception chapel and Atrium for the Christmas holidays.

A teacher first and foremost, Mr. Z’s list of classes taught over the past forty-one years includes religion, American history, art history, Latin, business law, economics, and even typing. His way with students never varied—disciplined, firm, and always one of high expectations. That being said, Mr. Z was always quick with a friendly verbal needle, as well words of encouragement that helped students reach their full potential.

Mr. Z reached out to all students, and daily, he lent an ear to those who needed it. In the days when smoking was allowed on campus, he could be seen regularly on the “smoking slab.” His outreach was so great that an anonymous alumnus chose to establish two fully funded scholarships in Mr. Z’s honor in the mid-2000s – the James M. Zolnowski Tribute Scholarship and the Living Mentor Scholarship.

In 2008, Mr. Z was honored by Chaminade's Alumni Board with the Honorary Alumnus Award. Mr. Z’s life was Chaminade. Aside from the occasional trip back to his hometown of Cleveland, Ohio, he could be found in the library, chapel, residence halls – always somewhere on campus.

Mr. Z has touched the lives of so many students and is a true model of Esto Vir.